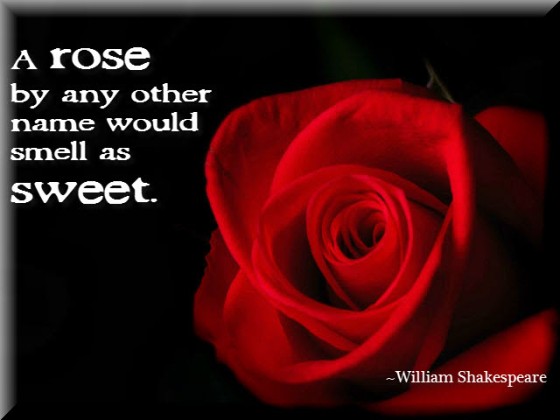 “A rose by any other name would smell as sweet” quoted Shakespeare famously in his play about the star-crossed lovers. What was untold to preserve the aesthetics of this dialogue was that this dictum can only be applied to common nouns and to things, as opposed to people. For a person his name becomes him. Sometimes a name carries on a legacy long after a person is dead (think Hitler or Gandhi). A name is like DNA carrying in it information about a person’s gender, race, ethnicity, nationality and sometimes social standing.

A few of my friends are expecting and a common topic of conversation is the name of the baby. The significance of a spending a good deal of time researching the name is diluted by the weariness of the pregnancy itself. Expecting parents are the worst candidates for choosing the best possible names for their kids, but routinely bear the onus to do so. Some of my foresightful friends thought of one even before they get pregnant, only to be subject to familial plagiarism!

I remember being 10 or 11 when I first questioned my parents about my name, and whether they had any others shortlisted. Not usually the one to offer unsolicited advice, I can’t resist this one – please don’t tell your children the name they almost had! Both me and my brother had almost-names, and we often wondered what frame of mind our parents were in to choose our current names over those.

I have never met a namesake. And if the internet population is anything to go by, there is no one who shares my full maiden name. It’s a privilege I wished away. And yes, I have a fake Starbucks name.

I have hauled my name along all my life. Often it’s been unwieldy and ineffectual. It taunted me with disloyalty. I trudged it along, bearing it until the burden eased and I no longer felt its constant presence. Occasionally it prods me, but is mostly happy with my concession.

It’s not just a cosmetic problem. Numerous studies have found name bias in play, where an unusual sounding name can affect your prospects of employment, housing and even education.

When naming our kids we choose simple but unique names. I knew I would be questioned about them, what I didn’t realise is how soon it would happen. My then 4-year old asked me one day how he was named – did he come out of tummy and announce “Hi, I’m Ayaan!”, or came with a label? If only it was that easy! It troubled him greatly that choosing his name was a pretty random affair, but being 4 he couldn’t articulate it. Clearly, he inherited the ‘I-don’t-like-this-naming-business gene from me. We spoke about it again recently, just after his 5th birthday. This time he asked me if we had considered other names for him, and why did we finally decide on Ayaan – “why not Charlie or Alex?” Sigh!

The next time I may have to be ready with better answers – we put in a lot of names in the fishbowl and drew out this one! Or it was assigned by the government, specifically the Ministry of Names. Or we conducted a poll on Facebook (this is actually true for some people!)

© TheHHNarrative, 2017. Unauthorized use and/or duplication of this material without express and written permission from this blog’s author and/or owner is strictly prohibited. Excerpts and links may be used, provided that full and clear credit is given to thehhnarrative with appropriate and specific direction to the original content.